Lot of people watch the Superbowl for a lot of different reasons, and many watch it who aren’t even fans of the game, simply because they find everyone they know is glued to the television, so if you can’t beat em, join em. Right? Well, fortunately there is always a plethora of new and hopefully entertaining commercials to delight and provide a break from the tedium of the game known as American Football. 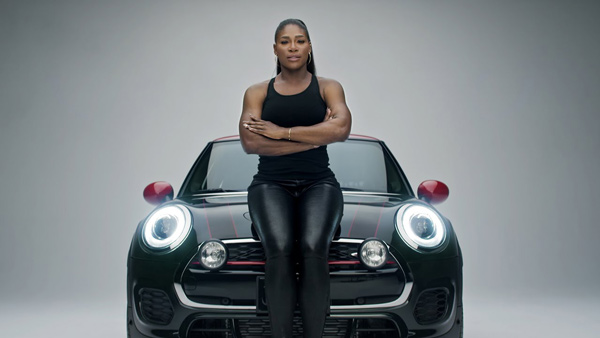 This year was no different, with a number of commercials that stood out from the rest. While my favorite was the Heinz commercial featuring an army of hot dog costume-wearing Dachshunds, the one I’m writing about in today’s blog is of course, MINI USA’s offering.

The 30-second spot features tennis champion Serena Williams, soccer star Abby Wambach, and veteran pro-skateboarder Tony Hawk, among other celebs. The them of the commercial is “Defy Labels,” with each star posing in front of a MINI Clubman stating something ironically stereotypical about the car. For instance, Williams, with her athletic, muscular arms crossed in front of her and sitting poised on the hood, says with a stern look on her face, “This is a chick car.” Tony Hawk says, “This car has no street cred.” Six-foot-ten-inch pro baseball pitcher Randy Johnson leans over and says, "This is a short person’s car.”

They’re all things that people often say about our beloved MINIs. And these celebrities prove that the cars themselves defy the labels people give them. MINI Coopers, like their owners, defy stereotypes. They don’t (or at least shouldn't) care what people say about them. As actor Harvey Keitel says at the end of the commercial, “This car that doesn’t care what you call it.”

In the days leading up to Superbowl 50, MINI also released a series of videos showing interviews with the stars of the commercial talking about their personal experiences as MINI owners.