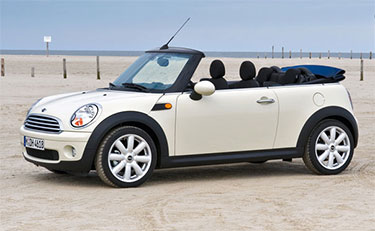 Even before the excitement of the new generation of MINI Cooper had waned, MINI had started development of what has become one of the most popular models in the line - the Convertible. Maybe they just wanted to get a jump on owners who had ideas of taking the top of their Hatchback on their own. Or maybe they just knew they were onto something fantastic. In any case, BMW released a Convertible version in 2004 (we are well aware that this would have been considered madness in 1960 with the original Mini).

One of the biggest surprises with the Convertible was that the soft top was fully automatic, and also allowed for partial opening to act as a sunroof. That is rare for such a small car. As a sort of tribute to the original Mini, the Convertible went to a dropdown tail gate for a small amount of cargo space. As it seated four people just as the Hatchback had, passenger space wasn’t compromised as the fun of a soft top was added.

Still around in a second generation version, today's MINI Cooper Convertible comes with the typical MINI 1.6 liter, 4 cylinder engine that helps the car get 27 to 34 miles per gallon. It comes with a 6 speed manual transmission, along with a ton of safety features, including:

The Convertible has kept up with technological advances as well, integrating the accessories that we need and want. From remote keyless entry and rain sensors and auto headlights to HD radio technology and Bluetooth and USB/iPod adapter, it has all been incorporated into this fun model. And we've yet to mention the one item that most owners brag about - the Openometer. This is a gauge that lets you know how long your top is down, in minutes. The higher the number the more fun you're having.

Just because the factory took care of the convertible option with the MINI Cooper, it doesn't mean you don't have any modification options left. Click through our online parts catalog and you'll find a growing number of maintenance and service parts, performance upgrades and MINI Cooper accessories that will "flip your lid" all at direct-to-you prices.