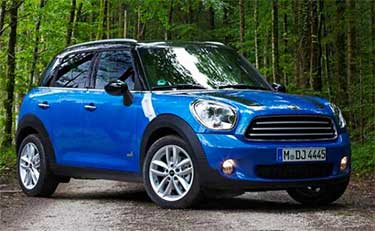 The MINI Cooper Countryman is the MINI that was built for MINI lovers who wanted something more. It is MINI's initial entry into the subcompact crossover SUV market. Originally almost a half foot longer than the Clubman, the Countryman offered drivers a car that had a little more space and excitement than other models without compromising on the fun (really - the Countryman is a popular car for rallies throughout the world).

Because of its popularity, there has been a Countryman model for every year since 2011. The latest offers a 1.6 liter, 4 cylinder engine that gets 27 - 43 miles per gallon. It contains a 6 speed manual transmission, and is also available is a slightly more powerful S model. There are countless safety features on the vehicle, from airbags and headrests to stability control and traction control. These have led to high safety ratings from the major reviewers. There are options aplenty as well, including an automatic transmission or keyless entry.

The Countryman comes with all the latest technological gadgets and accessories so driving around in it is as fun as ever. As you look for replacement parts and upgrades for your Countryman, or for additional accessories, you can count on MiniCarParts.net. At this point in time we carry parts for all systems, including brakes, electrical, suspension and steering. If you're not sure what part will fit your Countryman, or if you are having trouble finding something, please don't hesitate to contact our friendly service reps at 1-800-533-2210.