No Car Can Compete with MINI (Yet)

It’s no secret that the MINI Cooper is one of the most unique automobiles available on the market today. Heck, much of the car’s appeal is derived from its uniqueness. With go-kart handeling, German engineering and a one-of-a-kind design, the MINI family of cars has no true competitor, at least not yet...

Sure, read through a MINI review in Motor Trend, Car and Driver or Consumer Reports and you will likely see a list of “competitors” to which the MINI is compared. The usual suspects include: Volkswagen GTI, Audi A3, Subaru WRX, BMW 1-Series, Volvo C30. Yes, these cars have certain things in common with the MINI – some have 2-doors, all are fairly sporty, but each seem to have more in common with each other than they do the MINI Cooper, Coupe, Clubman or Countryman. 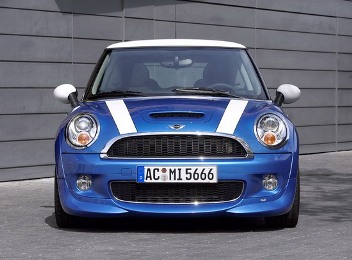 The latest import from Italy – the Fiat 500, comes close in shape and size, but really lacks the sporting DNA that is deeply ingrained in the MINI. So who is the MINI’s direct competition? MINI's greatest challenge is convincing consumers to purchase a vehicle that is (fairly) expensive and (pretty) impractical over a less expensive and less exciting alternative. They have managed to overcome this challenge through through clever marketing of their unique product. The MINI appeals as a symbol of youthful individuality, a toy for grown-ups, and a guilty pleasure, and it has been marketed as such. This MINI “appeal” has been extremely profitable. As a result, other auto companies have been exploring their own options within this market segment hoping to replicate MINI’s success.

Take the Kia Track’ster for example. While only a concept, the Track’ster has clearly taken design cues from the MINI Cooper. But the Track’ster does more than look the part. The concept boasts 250hp and AWD, meaning it can haul. This concept would probably be pretty expensive and even less practical than a MINI Cooper (there is no back seat, just equipment bins and a spare tire), which is why it may never see production.

MINI will enjoy limited competition until a vehicle like the Track’ster does make it to production, but Kia’s concept is a sure sign that other companies see MINI cornering the “unique, youthful, toy-car” market and want to get in on the action.