MINI on the Mack Comes Just Shy of Record

Over 1,000 Minis attended the 2015 MINI on the Mack event, attempting to break the previous world record for the longest parade of Mini Coopers. 1,319 cars showed up; an impressive turnout, but not enough to break the 2009 record set in London of 1,450.

The Minis drove from Mackinaw City in a single-file line over the Mackinac Bridge on Saturday, August 1, in the largest gathering of Minis ever documented in the United States.

Vehicles and their owners attended the event from all over the country, with license plates seen from as far away as Alaska, New York, Florida, California and Texas.

Doug Sholte, of Indianapolis, who drove all through the nigh to make it on time, isn't disappointed that a new record wasn’t set. "In fact, it doesn't break my heart at all. I love this event and can't wait to come back and try again,” he said.

While no official announcement has been made, social media MINI owners groups are starting to petition for a 2017 attempt.

The Londoners, meanwhile, can rest comfortably that they will keep the record for now. But they are on notice. One owner from the UK issued his congratulations: "Big congrats from all the Mini fans in the UK." 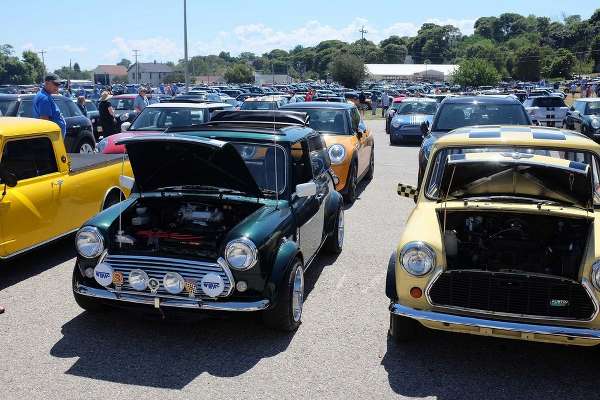