Orange County, FL - News outlets all over the country are reporting on the story of four men who, after a bonfire party, took their MINI Cooper on a booze-fueled late night escapade. The four of them ended up passed out in the car which was stuck on a neighborhood lawn, with a deer carcass stuffed in the back. 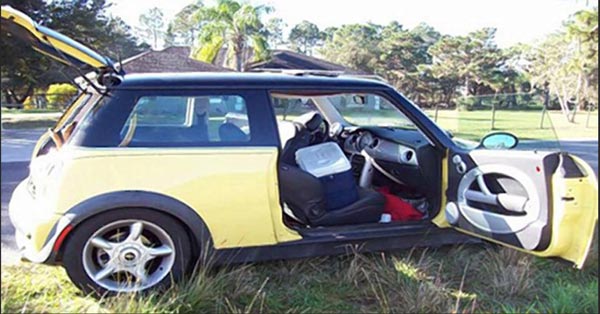 Neighbors were awoken in the wee hours of the morning by several loud booms, presumably the shots fired that took down the animal. When local deputies arrived on the scene, they discovered the four passed out in the vehicle, with the remains of one deer in the trunk and, according to some other reports, another deer underneath. A Florida Fish and Wildlife Commission report says that the men intentionally hit one of the deer, lodging it under the car, which then became stuck, necessitating the impromptu "camp out."

Police also discovered marijuana in the vehicle. Ronnie Doby, of Haines City, and Thomas Vanzant, of Lake Alfred, have court dates next month.