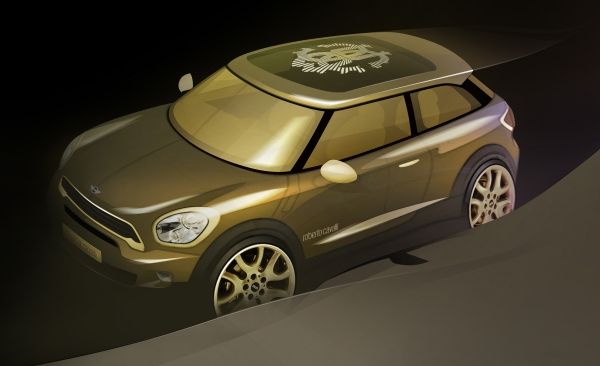 Munich/Vienna. For the 13th time in succession, MINI is donating one of its models to the Vienna Life Ball for a good cause. Once again the MINI will be given a makeover by an internationally renowned designer before being auctioned at the ball, with proceeds going to projects dedicated to the battle against and prevention of HIV and AIDS. This year it is the MINI Paceman, the youngest and seventh model in the MINI family, that will bear the creative stamp of fashion designer Roberto Cavalli. It sees him joining the ranks of world-famous fashion labels such as DSQUARED², Diesel and Missoni, who have in the past transformed a range of MINI models into sensational one-offs. So far the Life Ball MINI auctions have raised total proceeds in excess of half a million Euros.

Life Ball MINI designed by Roberto Cavalli.
With the MINI Paceman, Cavalli encounters the first stylish, urban Sports Activity Coupé. With its sporty design and striking coupé silhouette, it is aimed at individuals who are not shy of making a statement behind the wheel. Cavalli’s unconventional style chimes in perfectly with that of the Life Ball MINI: in his creative exterior design featuring iridescent paintwork that shimmers from black to brown depending on the incidence of light, the Italian designer accentuates the dynamically stretched lines of this athletically agile two-door coupé. Roberto Cavalli’s expressive logo adorns the roof of the MINI Paceman, which appears to float above the car body. "This MINI was an exciting and wonderful project for me”, says Roberto Cavalli. “It gave me the opportunity to be creative and finally use something very special, which I have personally invented and already used for years for my own vehicles: it is a unique iridescent paint which changes color depending on the way the light illuminates the pigments.

I loved everything about creating and designing it, transforming the cult of MINI into the incredible Cavalli MINI, complete with the Cavalli logo on the roof and Cavalli style interiors, which are a really an incredible surprise to discover.”

Cavalli staged the fashion show of the Life Ball as far back as 2001. That same year saw MINI commence its partnership with the charity event. Twelve years on, Roberto Cavalli has upgraded the latest model in the MINI family to a coveted collectors’ item.

On 24 May 2013, the MINI Paceman will be formally unveiled during the official opening of the new Cavalli store in Vienna’s “Goldenes Quart1er”.

The one-off MINI will be auctioned in the Hall of Ceremonies at Vienna’s Hofburg palace as part of the AIDS Solidarity Gala on Saturday 25 starting at 5pm.